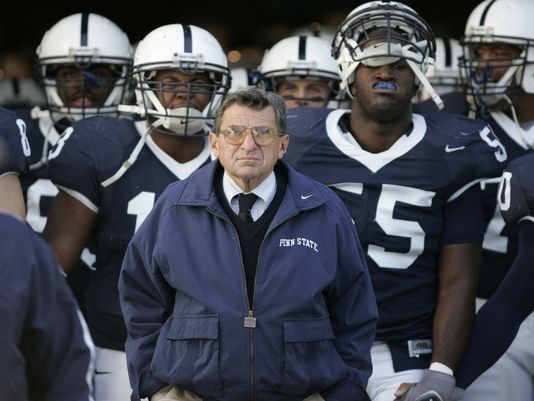 The turmoil surrounding State College, Pennsylvania, and the subsequent firing of Head Football Coach, Joe Paterno, had enveloped the headlines. Whether it is because of the squeaky clean reputation of this of this prestigious institution, the dark cloud of sexual deviance that has come over it, or the fall from grace of a living legend, this has virtually taken over the twenty four hour news cycle in every part of the country. The views on the situation vary from the informed and intelligent, to the radicals of the lunatic fringe.

I have read the twenty three page transcript of the Grand Jury, which is available to the public (which although is extremely graphic, I would encourage everybody to read), and I have the same questions as many whom have had their moral center shifted by the course of events. My main question after reading, which may never be answered, is how could so many people, including individuals in law enforcement, have investigative knowledge of the history of Jerry Sandusky, and it go without prosecution. Contrary to popular opinion, in reading the transcript, I found Joe Paterno’s actions to be appropriate and just. I don’t say that as a former football coach, but as an objective journalist. That does however bring me to the question, “Why did Joe Paterno get fired?”

I understand his prestige, all the honors and accolades he has achieved, and even his stability of having been on the sidelines of Penn State since 1950. But with all of the history, we all need to remember that at the end of the day, Joe Pa was still only the football coach. He was not an administrator, Athletics Director, Vice President, or President of the university. He was a coach, regardless of what else the public, or the media has built him up to be; no more, no less. As with most coaches, Paterno had a large ego, and an enormous amount of arrogance. The competitive nature of the business of coaching almost makes these natural characteristics. The problem with these characteristics is when they are combined with longevity, a chemistry imbalance occurs between the head coach and the administration, that can only end badly.

A few years ago, the administration at Penn State requested Paterno to retire. Arrogance kicked in when Paterno said “no”, and basically informed the administration that “I’m not ready, and I will go when I want to go”. In any other profession on the planet, an administration would just come back and fire the employee, but this is where I have tried to explain to the average fan, that the coaching profession, and the business of college athletics, does not operate like any other profession in the world. Longevity and arrogance (not to mention a couple of National Championships) creates a persona of faux armor. It has the ability to temporarily shield you from the powers that be. Unfortunately, Paterno has found out late in life that which most of us have found out early in our careers. That persona is a short lived illusion. It is a trump card that can only be played once, and that once used, you truly leave yourself vulnerable to culpability for occurrences, that in all reality have nothing to do with you. This was Joe Paterno’s ignorance of the chemistry of arrogance. Let us not forget. Jerry Sandusky allegedly committed these acts, not Joe Paterno.

Joe Paterno was the Head Football Coach for forty six years and an employee of Penn State University for an additional sixteen years prior to taking the helm. In 1998, when a prominent member of his coaching staff was accused of misconduct; a member who was the heir apparent to succeed him as Head Coach, Paterno not only informed him that would not happen, but insisted that he retire. Three and a half years later, when a Graduate Assistant Coach reported to him, an insisted that he eye witnessed the alleged inappropriate behavior, he called the Director of Athletics and the Vice President, and reported the alleged incident, as he was suppose to. The incident involved someone who was not a member of his staff, but had university authorized, “Emeritus” status on campus. As much as we want to feel, believe, and preach, it was NOT on Joe Paterno to contact or follow up with any outside law enforcement agency. Especially, as the Vice President he reported to was also in charge of the campus law enforcement.

Joe Paterno was not fired because he failed to follow up on the responsibilities of his superiors. Paterno was fired because he fell into the chemistry imbalance of ignorance and arrogance. The Board of Trustees at Penn State had the most prominent football coach in modern history over a barrel that was not created by his doing, but by the conduct of a former member of his staff. They were able to say “this is our chance to attach culpability to him, even though there may be none, and we can justify the termination.”

If Joe Paterno is guilty of anything, it is of a natural act, and something that all of us are guilty of. He is guilty of trusting his superiors to do the right thing, report the truth to the proper authorities, and let them follow their legal course. When that didn’t happen, the illusion of arrogance, and his persona of power was lost, and as the Head Coach, the buck stopped with him. A sad ending to a marvelous career.

“The Coach” John Parker is a 24 year retired college and professional football coach. He is a national radio/television Host of “The Sports Mayhem USA” on the Sports Byline Radio Network. He is the author of the book “A Compartmentalized Life”, President of Parker Sports Enterprises, LLC, and the Executive Director of the National Student Athlete Advocacy Alliance.

Team Colours Ltd: The One-Stop Shop For Sportswear And Leisurewear

What Are Surfboards and Their Types Available For New Surfers?