The Original RGB Xyloband LED Wristband brings spectacle, color and lights to concertgoers in the form of wearable technology. It’s a 10-inch long adjustable wristband that’s equipped with a tiny antennae and a wireless receiver that combine to create millions of possible colors and effects, says the manufacturer of the product.

The light show on the wrist is controlled by a programmer using the DMX time code. The lights and effects emitted from the wristbands may be pre-programmed or they may be live. As the music or action of the concert proceeds, the colorful show on the wrist can be synced not only to music but also to lights, video, a DJ and more. The programmer may shine light on the audience or spotlight specific sections of the crowd in different colors.

The battery in the band provides 8-12 hours of power. For multi-day events, there’s an extended battery that lasts 20-24 hours for a four-day event. A single transmitter on the ground controls 50,000 Xylobands. The effect of this wearable technology is to make an event at a large venue a very interactive experience.

The use of Xylobands stimulates conversation about the concert or the wristbands themselves on social media. Some fans have said that the wristband was still active when they went home after a concert and that it kept them awake at night. Well, who knows when a battery’s going to die? 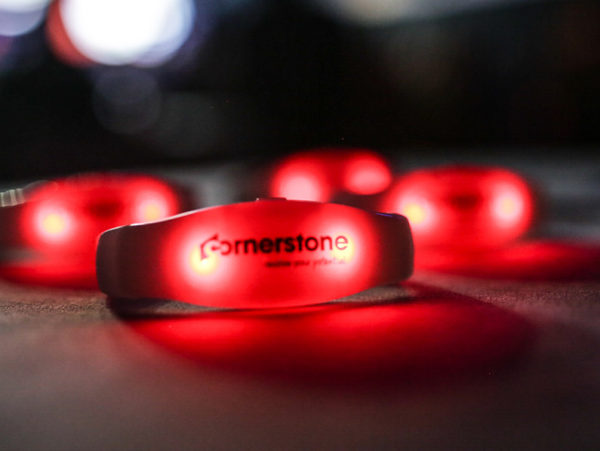 The Xyloband LED Wristband made its debut in 2012 on Coldplay’s Mylo Xyloto tour in Madrid where they were given out free to the fans. Since the wristbands are lightweight, flat and made of breathable fabric, concertgoers can easily stand up and move their wrists.

This light and motion energizes all at a venue, including the performers. Businesses that want to promote their brand can have their logos put on the battery case and two other places on the band. Another choice is a wristband with an embedded chip that permits a more organized entry and the tracking of attendees.

In addition to being an over-the-top addition to a concert to make it rival the Super Bowl or the Opening Ceremonies of the Olympic Games, this LED wristband is an that’s environmentally friendly. It can be recycled. Just pop in a new battery and it’s ready to use again if promoters want it back.

Background of the Manufacturer

Clive Bank, an entrepreneur, and Jason Regler, who developed the wristband, head RB Concepts, the company based in the United Kingdom, that manufactures the product. In an August 2012 article appearing on This is Money.co.uk, Regler said that he was able to pitch his wristband idea to Chris Martin, the band’s leader, at a charity event to which he took his son. Martin was so impressed that he became an investor in the company.

The Xyloband wristband has been used throughout the world. Pitbull, Shakira, Maroon 5, Katy Perry, Flo Rida and Usher are among the performers who have used it. The company has expanded its product line to include 360 Degrees of Light LED Wristbands, Audio Playback LED Wristbands, LED Lanyards and Glow Balls, which are big, colorful objects similar to beach balls.

The Xylobands USA technology team come from 35 years of experience and are simply the best.  From TLC Creative, their expertise will not only provide you with exceptional ideas for how to make your event stunning and memorable, but they will take the stress out, knowing that their experience, reliability and dedication will kick in to be sure everything goes off as you envision.

Things To Consider While Opting A Responsive Web Design

Get More Out Of Software Asset Management With Its 2018 Updates