A decade ago, introducing the Internet to a classroom of children might have sounded terrifying to a parent or teacher. Today, Android’s Tabeo tablet has all the benefits of mobile development without the worry that might have previously plagued teachers and parents about introducing personal web resources into the classroom.

With the release of Tabeo, a 7-inch, entry-level tablet designed for children, Android brings education to the forefront of mobile platforms. This comes as a materialization of Android’s greater goal to foster mobile application development in education, providing children and students with an affordable, safe and accessible technology platform.

The goal here is to offer a tablet children can easily use—employing controlled Wi-Fi and Flash-enabled website access—to better introduce them to technology in a fostered, directed environment. These tablets work well in classroom settings, allowing parents or teachers to block objectionable websites while utilizing the tablet’s 50 preloaded games, books and e 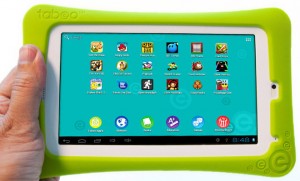 ducational apps. There’s also access to over 6,000 more apps at the Tabeo Store.

But why a tablet for children? And why not Apple? Affordability is one key, and the next is accessibility. The apps offered through the Tabeo have been created specifically for education. While other tablets might offer a similar array of apps, Android’s Tabeo puts the educational apps and options at the forefront, giving children a first-glance at the opportunities created when education is partnered with technology. Many of these apps foster peer-to-peer communication, giving classrooms that cutting edge to further communication between the students and with the teachers. This is an open tool, the way a library often feels to a newcomer, but completely hand-held.

And the ways apps are created for Tabeo offer even more options when compared to Apple or iOS. Because Android gives app developers full reign to implement new applications for Android devices, more developers can create more options for tablets like Tabeo. Rather than taking the time and effort to receive Apple’s approval for a new app, educational app developers have the freedom to create apps with a wide range of possibilities. It’s not just the hands-on usage of Tabeo that makes it a great tool; the hardware and software development behind the tablet is designed for innovation so that children and students benefit from different sources with varying creative approaches to education.

Take a look at a list of 20 Educational Android Apps for Kids and you’ll begin to understand how creatively app developers can marriage technology and education. These applications are relatable to children at a very early age—with alphabet, color, and animal apps—but are also relevant in more advanced levels like astronomy and algebra. Offered only at Toys “R” Us, the Tabeo comes with 4 GB of memory along with an SD slot capable of handling 32 GB of memory. Even the physical design is conducive to a younger audience: the drop-safe bumper and sturdy design of the Tabeo was designed to handle those unavoidable mishaps to and from the classroom.

It’s an exciting thing, introducing educational technology into our homes and classrooms. And the introduction of the Tabeo is surely a momentous achievement as Android leads towards further mobile development.

Cloud Based Terminology You Should Know

Equip Your Laptop For The Road: An Essential Software Guide

Google Nexus 7 vs. Apple’s iPad: One-Upmanship in the Tablet Platform

The Reason For Get Appliance Insurance