We see it all the time now—parents letting their toddlers play games on their smartphones, laptops or tablets. It’s practically the most common pacifier in this mobile-device-driven world. However, this practice definitely has its drawbacks; not the least of which is behavior alteration. According to reports from the UK, kids as young as four are already using tablet computers as many as four hours per day and, if the device is taken away from their grasp, they throw tantrums and act violently. Simply put, they become addicted to the devices. 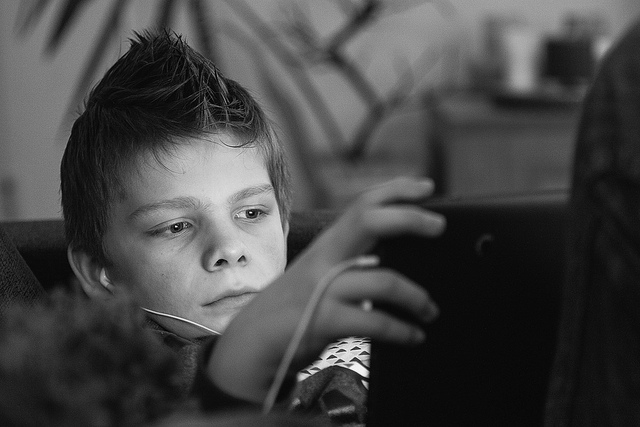 With the way modern living is immersed in consumer technology, it’s not all that hard for kids to be exposed to mobile devices. Parents usually have them in one form or another, usually in multiples. It’s common to see families waiting for their food at restaurants killing time with their mobile devices, playing games or browsing through their preferred social media sites. Then you see the kids, also swiping their fingers across tablet screens as big as their faces, playing simple games that appear to be harmless.

That’s until they start spending hour after hour after hour holding that smartphone or tablet. When you consider that a lot of a kid’s daily life is spent sleeping, there will only be little time left for other formative tasks. What’s worse, the kid could lose valuable sleep if they have access to the gadgets at late hours. Then they get all grumpy when their tablet time gets restricted. This behavior will only become more dangerous as the kids grow older.

In addition to this, they will miss out on the kind of social interaction they need as kids and young adults if they spend too much time on computers and mobile devices. Playing or interacting with other children their age will be put on the backburner as they become more focused on getting to 50,000,000 points on Temple Run 2 or beating that next level on Candy Crush Saga. This is getting to be too much of a problem, so much so that, in the UK, there’s already a ‘technology addiction program’ that kids are being sent to.

Mobile devices are indeed very useful and have functions that allow us to perform some of our daily tasks much more easily and quickly. Through VoIP services (read more) and video calls, they allow us to connect with people we otherwise wouldn’t be able to reach. However, as Spider-Man keeps telling us, “with great power comes great responsibility.” This is especially true for mobile device users who have kids. Make sure you use your mobile device responsibly around your kids (and, by extension, even when you’re around other kids).

If you have your kid around, don’t spend every second glued to your iPad’s screen. Interact with your kids, play with them, or talk to them. Make sure you guide them and that you don’t teach them bad habits. This isn’t very easy to do, given all the things one can do (or has to do) on a mobile device these days; but as parents, guardians, siblings, and adults in general, we can’t let technology get in the way of proper behavior development among impressionable kids.

There are certain benefits to exposing kids to technology at an early age. Access to computers and mobile devices can be effective rewards for excellent academic performance, for example. Games and other tools can also help kids learn and develop critical thinking. However, like many other things, this must be done in moderation. Just because that iPad gets your kid to stay quiet doesn’t mean it should be your go-to move, simply because it could have disastrous long-term effects on the kids’ behavior. Make sure to keep this in mind the next time you hand your tablet over to your kids.

How to copy a DVD from a laptop

Tech Evolution: 5 Tips To Keep Ahead Of The Wave

Basics Of A Router

What’s The Next Big Advancement In Cell Phone Technology?

Mistakes to Avoid When Buying a Laptop

The Importance of Having APC UPS System