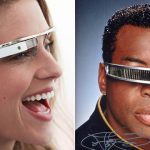 Technology has a way of improving and changing on what seems like a daily basis. Even in the last 30 years, there have been incredible improvements. Bulky desktop computers have morphed into small laptops and tablet computers. Cell phones have changed from large handheld sets to smartphones that are capable of just about everything a computer can do. Google has constantly been on the forefront of some of the technology related to the computer. Their newest venture is with Google glasses.

What Are Google Glasses?

If you have seen the YouTube video or any of the other mobile marketing tactics used by Google, you will have an idea of what Google glasses are. However, not everyone knows exactly what they are. Google is in the process of creating a unique pair of glasses that will serve as a combination of several things. These glasses will serve as a smartphone, mobile computer device and augmented reality portal. Through these glasses, you will not just see the world, but information drawn from the world around you and the cloud storage.

How Do Google Glasses Work?

Are Google Glasses Right for Me?

Once Google glasses are released on the market, it will be up to you to decide if they are right for you. One of the considerations you need to make is whether you already wear glasses. If you don’t already need glasses, wearing Google glasses may not be something you want to do. However, if you already wear glasses or like to keep up to speed on the latest technology, these could be perfect for you. Having all of this information right in front of your eyes can be a great blessing or it can be an annoyance. Only you know if they will work for you.

The phenomenon of Google glasses is still very new. However, Google took advantage of mobile marketing techniques to help spread the word about these unique glasses. To announce these new glasses, which are still in the process of development, Google simply created and posted a video on YouTube. For most companies, such a small effort would likely go fairly unnoticed. However, when Google tries it, it becomes a stroke of marketing genius. As more people see the video, they will spread it through social media and email to everyone they know.

Even though Google is well known for its search engine and email service, it is quickly growing in other areas of technology. The pending release of the new Google glasses could launch Google into the world of mobile devices, helping everyone use mobile marketing more efficiently. It remains to be seen whether Google glasses will live up to expectations or be worth the cost; however, this could prove to be the next best thing in the tech world.

Learn From The Best: Examples Of Great Logo Design