We all love movies! Who doesn’t? Each depicts our lives and our emotions but, sometimes, you just want a good scare, right? When you feel like you’re in for a scream and a nice cuddle to go with it, turn off the lights, turn up the volume and cue these scary films that will make you jump out of your seats. Ready? 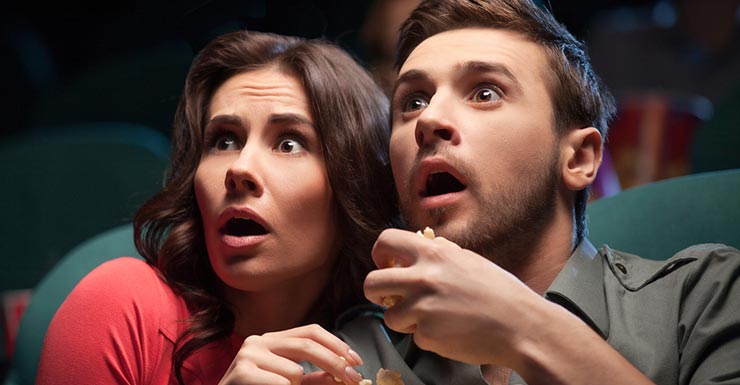 1. The Omen. Of all rich sub-genres considered as horror movies, the ones that do make anybody’s — and, I mean, anybody, including the least superstitious of your friends —are the ones that derive passages from the Bible.

Whether it’s the original1976 version or, the 2006 remake that you’re cueing, get ready to have disturbing nightmares and thoughts after seeing this film. The story revolves around the birth of the Antichrist, Damien, a character created by novelist, David Seltzer. Born to a well-off family, this is only the first part of a series of uncanny killings surrounding the survival and the eventual world domination of the Antichrist. Trust me; you’ll want to see your partner’s scalp to check if there isn’t any “666” written on it!

2. The Exorcist. It is an enthralling tale of a teenage girl, Regan, who is possessed by an ancient demon from which two priests, LankesterMerrin and Damien Karras, try to recover the girl. The priests and the mother who is willing to give up everything for her daughter to be freed by the demon have to battle the demon but also redeem themselves from their most sinful acts by restoring their faith in God. Only then will they be able to conquer the demon and bring back Regan.

3. Amityville. The story with which the film was based continues to be a mystery. To this day, people are still asking, “Is it real or, just fiction?” It is also arguably the most legally embattled horror story ever to be written and filmed. The Lutz’s haunting, so the story goes, is the basis for this “true story” account, starting when they moved into a house that previously belonged to the DeFeo’s whose lives were taken by the father, Ronald, Jr., himself.

After you get to that part highly regarded as one of the scariest scenes on film, nobody’s going to get up to take a quick pee.

4. The Vatican Tapes. This 2015 film revolves around the main character, Angela, who was first believed to be carrying the Antichrist. After a series of untoward events that leads Angela to a coma, she comes back seemingly full of energy and has been observed always to be surrounded by crows, apparently the messengers of the devil. The film ends with Angela perverting the Holy Trinity and resurrecting like Jesus Christ. It will leave you and your partner debating about what happens next.

5. A Nightmare on Elm Street. One of the grossest, most violent horror films ever to hit theaters was in the 80s up to the 90s was Freddie Krueger. He is the most dreaded nightmare of teenagers residing on Elm Street. You won’t want to close your eyes and fall asleep again when you see how brutal Freddie can be with his bladed hands.

6. The Conjuring. The story tells the story of a haunted family, that of Roger and Carolyn Perron, who were helped by famed spiritists, Ed and Lorraine Warren. In the story, Carolyn was possessed by an evil spirit who has made a deal with the devil. She then attempts to take the lives of her children which was stopped by the Warrens.

7. Child’s Play. “Hi, I’m Chucky, and I’m your friend till the end.” Remember those lines because it’ll play in your head over and over again, at least for the next couple of days. This is one film you don’t want your very young children to see because then, nobody’s going to want to play with their dolls again!

8. The Ring. The first of many horror movies remade from their original Japanese versions, this film tells the story of Sadako. If you’re feeling a little sissy, you can settle for the 2002 American adaptation which stars Naomi Watts.

9. The Grudge. Another Japanese original, tells of a haunted house in Tokyo. Don’t peep under the sheets!

10. Hellraiser. This time a Brit offering in the 1980s, Hellraiser is about parallel dimensions which scares you and philosophizes with your thoughts at the same time.

Conclusion
Don’t give yourself a heart attack! Choose a horror movie depending on your stamina for scare.

SAP FICO Training – What You Need To Know