Here’s a question for you:  Which nation’s flag is red, white, and blue?

The odds are your immediate response would be, “The American flag, of course!”

That’s true, but not entirely correct. Other countries also use red, white and blue for their flag colors.

For instance, here’s a short list of the 38 other nations who that magical trio:

Does it seem a bit odd to you that North Korea and the United States of America — two nations that have been at odds with each other for decades — both identify with red, white, and blue?

Here’s an interesting fact which will make you wonder even more: The North Korean colors mimic those of the United States flag, yet blue denims (jeans) are forbidden as clothing in North Korea… since they symbolize the enemy.

The origin of the flag of the United States of America

It’s a well-known story to Americans, and a long-running one at that. The USA flag was adopted in 1777. The Secretary of the Continental Congress, Charles Thomson, explained why those three special colors were chosen.

The 13 stripes were for the 13 original colonies that formed the United States. The stars indicate the number of states in the union… currently 50.

For many Americans, especially for those who have served in the armed forces, the flag is a point of patriotism and pride in America’s achievements. The fond nickname given the flag is “Old Glory.”

But what about North Korea? What’s their story?

The origin of the flag of North Korea

The colors of the North Korean flag are a throwback to the traditional flag of Korea, and these colors were the essential makeup of the original flag of the whole Korean nation. It was designed in Moscow, Russia, not in North Korea, and introduced in 1948.

I’ll leave the judgement calls about which nation is truest to its colors up to you. For myself, I’ll work on taking the log out of my own eye. 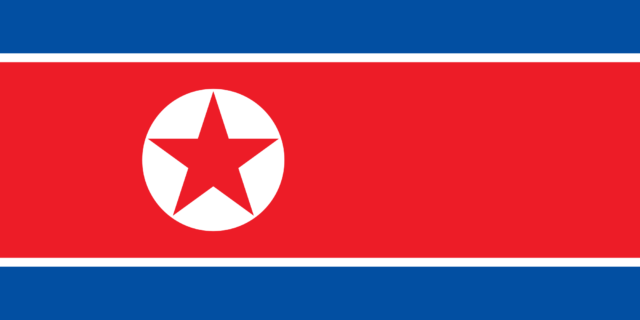 (Both the American and North Korean flags are courtesy of The Flagmakers, Denver, Colorado, USA)

Okay, but whose flag flies highest?

One more quick and interesting fact about flags…

The flag dissension between the two Koreas did not end with just the adaptation of a new flag by North Korea. In what was sometimes called the “flagpole war” between the two nations, North Korea installed the Panmunjom flagpole (520 feet) to fly a 595-pound flag of North Korea just across the demarcation line from South Korea.

For more than a decade, it was the tallest flagpole in the world. That record, however, now belongs to Saudi Arabia. According to Guiness World Records, the tallest unsupported flagpole on the planet is in Jeddah. It is 561 feet tall.

The tallest flagpole in all of North America reaches a comparativiely piddling 400 feet. It’s flown by Acuity Insurance in Wisconsin, USA.

Worse yet, in 2006 now-president Donald Trump was criticized for his desire to fly an American flag (on his own property) at a height of just 80 feet. The city of Palm Beach, Florida, fined him $1,250 per day for the egregious action.

Trump, in turn, took the city to court for denying his free speech. The parties eventually settled for a 70-foot pole.

Apparently, it’s fine in North Korea and Saudia Arabia to fly a flag as high as you can push it… but not so in America.

You’ll get fined for that.

Author Abel Cane loves the USA… and finds it very interesting. Don’t you? Catch up with Abel @boomalive, or look for his soon-coming guest post on https://roadturn.com.

How To Make Your Concrete Garage Look Good

Few Tips To Get Honest And Reliable Free Twitter Followers

How To Reinvigorate Your Yoga Practice