One of the major rumors surrounds the potential for color options. This would make sense when considering the recent releases of the iPhone 5c and iPhone 5 s. Both of these not only offered reduced price points but a variety of color options as well. Though the colors may match those of the iPhone 5c it is most likely that a gold option will at least be available.

The biggest upgrade will be the changes to screen. The previous iPad mini had a resolution of 1024×800. Since the iPad 4 is receiving a Retina display it is safe to assume its mini counterpart will as well. 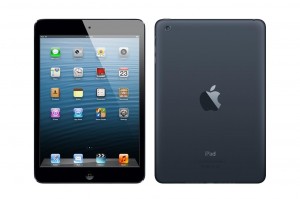 The latest version of iPad will have an upgraded 8mp camera. This will be a noticeable change from the previous 5mp camera of the iPad mini. It should also have a larger apertures adding to the overall quality of pictures taken with the device. Exterior design will be changed slightly with a thinner bezel edge. This allows the new device to be slightly smaller and lighter than the original iPad mini.

A confirmed feature of the iPad mini2 is the addition of the fingerprint scanner. The Touch ID increased the security of iPhones when released on the latest models. It uses fingerprint to unlock the device. What has not been confirmed is whether both options of the device will be equipped with Touch ID.

The iPad mini 2 will undoubtedly be equipped with iOS 7 directly out of the box. The coprocessor is being changed to a location aware M7 model. This is designed to work with the new A7 processor. Apple’s A7 processor is of desktop-quality and 64 bits of power. This should ensure that apps can load at appropriate speeds. It also allows the iPad mini2 to have a powerful accelerometer, measure motion data, and to use gestural data. These upgrades will improve location detection and the device’s ability to detect movement for actions such as gaming. The memory size options available are expected to remain the same. The base size being a 16gb, that may have either Wi-Fi or a 4G LTE option. The starting price is expected to start as low as $299 for the 16gb Wi-Fi model.

When to Expect Launch

It is expected that Apple will launch the iPad mini2 during Q4. The rumor is that the new line of iPads will be launched On October 15th during a press event. This matches the release of its predecessor which also occurred in the month of October last year. Drops in pricing for the original iPad mini have also been reported which is in line with the course of action Apple takes leading up to a product launch.

Another rumor that aligns with the fact that Apple wants to diversify its chain of supplies is the expected shortage of supply. The upgraded Retina display is expected to cause a delay in manufacturing. Last holiday season Apple sold 13.75 million units of the iPad mini in just Q4. If the iPad mini2 sales are similar, the issue of supply can be a huge issue for Apple’s bottom line.

Making Sure Your Wireless Home Network Is Secure

US Unleashing the Wireless Broadband Revolution

5 Things to Know Before Going Wireless

No Nonsense with the Meraki WiFi Stumbler