Information technology is becoming increasingly popular and necessary in this modern world. A computer programmer is an important person in this field who is responsible for all of the software that is developed. The programming language that is used for each piece of software is key in determining its popularity and value. Instead of understanding just one of these languages, a programmer should comprehend a few different languages. Here is a look at the top programming languages and why they are in high demand. 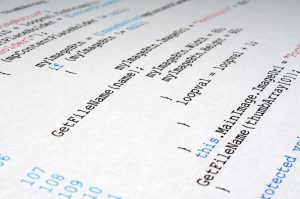 Java is at the top of the list of programming languages. It has been rated first on the list of the TIOBE Index for some time. This indicates how popular the language has been based on how well it has sold internationally and how it has been viewed by software engineers. One of the main reasons why Java is popular is because of the Java Virtual Machine. This makes Java software capable of being run on other operating systems. Also, Java has large libraries and parts that are not available with other languages. Java is the language that is the basis for Android systems. Since most all phones use this technology, Java developers are sure to be in high demand.

This language is much faster than Java. It requires this quick speed in order to be run at certain places besides the original development area. C was primarily developed for use on the Unix Operating system. However, it can be used in other systems with a bit of special knowledge. This is the language that is preferred for fast applications. It can also add function to other systems as well.

C#, or C sharp, is a programming language that was developed by Microsoft to run in a Windows based system. It is as easy to learn as Java, so there should be no confusion. The reason why it is so popular lies in the fact that it runs fast and powerful applications on a Windows system. Windows 7 phones usually use C# to run. It seems like more and more Windows technology will involve this programming language. Therefore, programmers who comprehend C# will be in high demand.

PHP is language that has been developed in order to make web pages interactive. It is simple to use and has good documentation. Since more and more applications are becoming web based, the demand for this language is becoming greater. PHP also has a syntax that certain clients require. As additional applications become web based, it will be essential to master this language.

Objective-C language is mostly used to create highly intensive software. It is a language that is object oriented and has been influenced by Java. In order to stand apart from the crowd of average computer programmers, it is wise to learn this language. Many businesses are searching to hire an employee who understands this language. It is the basic element that is used for Apple products including the popular iPhone, iPad, and iPod. As a higher amount of technology begins to use this language, there will be a greater demand for programmers who are well versed and knowledgeable with Objective-C.

When a person is beginning a career as a computer programmer, it is essential to become familiar with various languages. The above computer languages are just a few of the most popular and widely used in the development of software products. Comprehending more than one of these languages will bring high demand and assure a long life in the programming industry.

Author Bio: William Stevens is a writer who creates informative articles in relation to technology. In this article, he describes a few popular programing languages and aims the encourage further study with a masters in computer science.

Block websites on your computer

10 Great Travel Apps for the iPad

Why An In-house cIAM System Is Like House Party Gone Totally Wrong!

Why Need Antivirus For Your Computer?