Laptops nowadays really do give home-based desktop computers a serious run for the money. At this point the technology used within laptops has been developed to such a degree that there is essentially nothing a PC can do that a laptop cannot. It is also worth noting that the portable nature of the laptop probably gives it an edge in terms of popularity and the emergence of tablets appears to be only driving the laptop technology further. Where will this all end? It’s difficult to judge right now but one thing which is certain is that the future is bright for laptops generally.

If you’ve always used a desktop and are thinking of changing to a laptop then there are a whole host of reasons why that’s a great idea. Smaller, lighter, able to go anywhere you do and packing a serious punch in power, here’s just a few things that you can do on a laptop, wherever you are in the world.

Laptops are becoming increasingly better at handling fast, processor and RAM heavy games, both at home and online a whole lot better than you may have thought. A gaming laptop packs a lot of RAM as standard meaning you’ll never experience any screen or program lag and will be able to play run any of the new or existing games you love on your desktop. Since more and more people are turning to laptops over desktop computers for their sheer portability and size, many new games are now optimised to run with the sort of specs that you can find even on an entry-level laptop model. 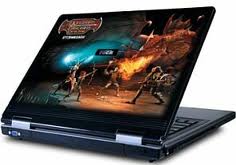 Music production on laptops has seen a big surge in the last few years. One of the reasons for this is that musicians no longer have to congregate in one place to record and separate tracks can be recorded, mixed or mastered at several different locations without the need of the whole band being there.

Also, if you’re an electronic music artist working solo, many great music programs can run on laptops with a suitably high-speed processor. This means that your bedroom or studio needn’t be taken up with bulky computer equipment and the space can be utilised for instruments such as keyboards or guitars instead.

Fast picture editing is a standard entertainment and necessity on many computers. All new laptops however are now able to handle large complicated RAW files with speed and ease that are shot on high-end digital cameras and professional photography equipment.

This means that whether you’re an amateur who just wants to record memories or a professional using your machine to edit commercial shoots, you can do so in confidence that it will keep up. Their high speeds when conducting a rapid transfer of files from camera to computer which can be very useful if you are at the scene of a shoot and need to get them across quickly.

The power of many modern laptops is greatest observed in their ability to edit video. Large sized 1080 HD movies from sources such as an HD camcorder flow extremely well in the editing programs available for laptops on the go. And watching back your hard work on a system such as a blu ray 3D player, you will be amazed at the power of your little computer.

Anny is an upcoming writer. She spent a lot of time in gaming,watching movies. Like to share her views on different new ideas with her readers.

What The Cloud Does For You and Your Business