Just check out the tech news of past few months. You will find Samsung Galaxy S4 shining everywhere. This incredible smartphone is successor to Galaxy S3, and has been matter of discussion for past few months. After a long wait, the smartphone has finally hit the stores and has started catching attention of crowd towards it. With the release of Galaxy S4, the competition field has become hot. The biggest competitor of Galaxy S4 is Apple iPhone 5. This smartphone has been there in the market for quite some time now. As a customer, you might be finding it hard to decide about which one to go with out of these two, right? This comparison between Galaxy S4 and iPhone 5 will ease the task. Do check it out. 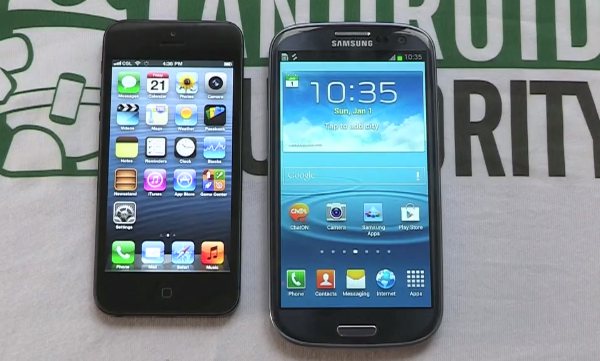 Samsung Galaxy s4 follows the outer look of Galaxy S3, with a little bit variation, and increased size. At the first instance, one may get the feeling that it is Galaxy S3 what he/she looking at. Dimensions of this smartphone are 136.6 x 69.8 x 7.9 mm.  It weighs 130g, so easily portable.

5.0-inch Super AMOLED capacitive touchscreen is what you get in Samsung Galaxy S4. The screen provides resolution of 1080 x 1920 pixels and 441ppi pixel density.

Apple A6 is the chipset in Apple iPhone 5. Processor is Dual-core 1.2GHz. Of course it is not as good as the Galaxy S4 in terms of speed, but not bad as well. The users of iPhone 5 have given positive feedback about the speed factor.

Samsung Galaxy S4 comes in three memory variants that are 16, 32 and 64GB. The memory can be further expanded by using microSD card, 64GB being the maximum. System Memory is 2GB.

Just like Galaxy S4, the Apple iPhone 5 is also available in three memory variants – 16, 32 and 64GB. System Memory is 1GB. Since there is no support for microSD card, so you should pick up any of these three models wisely.

Primary Camera is 13MP and Secondary Camera is 2MP. Dual Shot, Simultaneous HD video and image recording, face and smile detection are some camera features that you get in Galaxy S4.

Well, after looking at all these features, my vote goes for Galaxy S4. Both the hardware and software features are better than that of iPhone 5. I would like to know your choice. Drop it in the comment box.

Raj is the chief-editor of TechieDrive and TechieFusion , where he regularly contributes articles related to gadgets and technology.

Connect Your Company to the World

How to Prevent Your Smartphone from Flat-Lining

Quick Tips On Color Selection For Your Brand Logo