Mattress toppers are one of the most useful bedroom accessories, yet many people are unaware of their benefits.Not only do they make your bed that little bit comfier, but they also extend the life of your current mattress by up-to a couple of years.Two of the most popular fillings for toppers are memory foam and hollowfibre, both of which have their own benefits and characteristics. 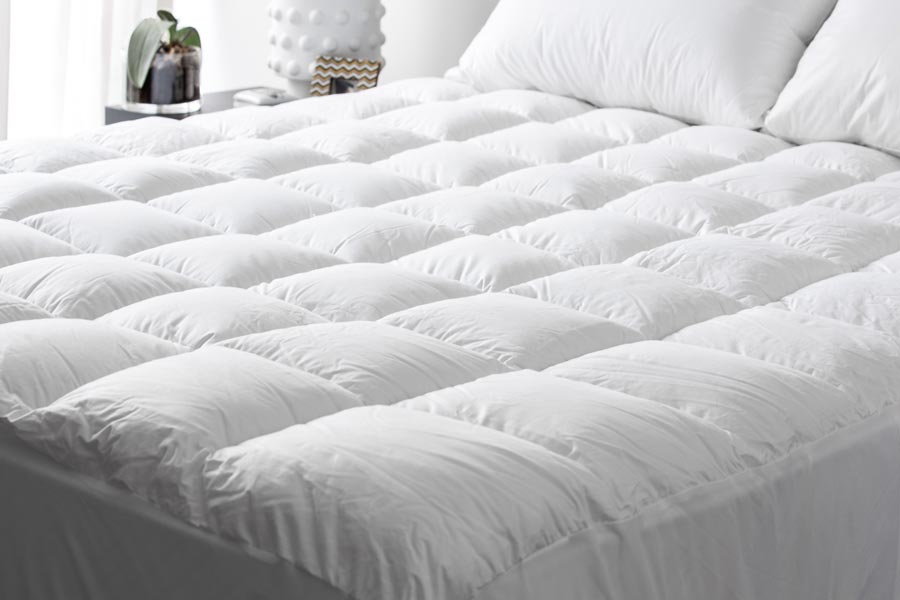 So which is right for you?

Memory foam is often considered the ultimate topper filling, and was pioneered by NASA to provide the ultimate in comfort to their astronauts!

When it comes to bedding, it’s perfect for those who suffer from neck and back problems as it softens in reaction to your body heat to give you customised support.What’s more, the movement of the topper is localised so you shouldn’t bother your partner too much by shifting around.

On the downside, memory foam isn’t very “breathable” so it doesn’t regulate your body heat too well, and many people find it to be too warm.However, if this is an issue for you could just consider using a duvet which has a lower tog rating.

The density of the topper is particularly important when it comes to memory foam as it affects how much support and ‘give’ there is in the topper, and for some, it can feel a little strange sleeping on an extremely firm memory foam topper for the first time.

While some people may simply get used to this after a couple of weeks, for some it may be wiser to just invest in a slightly softer topper.For more information on the pros and cons of memory foam check out this piece from WebMD.

Hollowfibre is a synthetic filling which is similar to tiny little strands of human hair and is designed to mimic the effects of natural fillings such as feather and down.

Each strand has a gap through the middle (hence the name hollowfibre) which traps in air and warmth.

The gap in the fibres is also great for regulating the temperature of the topper, keeping you warm during the winter and cool during the summer.

This is something which memory foam toppers are unfortunately lacking.You can even get reversible hollowfibre toppers such as this one from SleepyPeople.com which features a cool microfibre face on one side and warm fleece on the other.

Hollowfibre toppers can vary considerably in the level of support they offer depending on how much they have been stuffed, but they generally offer a good deal of support and structure.

Other things to consider

Generally speaking, memory foam is a bit more expensive than hollowfibre, as it is a more sophisticated material and people prefer the custom support that it is able to offer.

However, just because a topper is more expensive doesn’t necessarily mean it is better, so make sure that it is right for you before making your purchase.

Of course, you also shouldn’t be tempted to skimp on price and purchase the cheapest topper available. It’s important to strike a balance.

Whether you choose memory foam or hollowfibre, you’ll also have to make a choice on how thick you want your topper to be.They can vary quite a lot, form 2 inches to as much as 8 inches, so it’s important to think about.

A thicker topper is generally better, especially if you sleep on your side or are trying to breathe life into an old lumpy mattress but it’s all down to personal preference.

Of course, a thicker topper will also provide you with more support, so could be better if you do struggle with aches and pains.

Memory foam and hollowfibre both have their own pros and cons but ultimately it’s down to you and your own personal preferences as to what its right for you.Generally speaking, memory foam is more supportive, but for some people it just feels a little strange!

Designing Your Own Custom T-Shirt Easily

Reaching The Top As A House Clearance Company