The new Gusto is Mahindra two wheelers’ most affordable scooter in India. It is powered by the company’s original M-TEC engine which is a 109cc four-stroke single cylinder unit. The Mahindra Gusto possesses a stimulating new design compared all the other scooters on sale, with a lot of sharp creases sans curves. It has wide seats which makes the rider a joy for the rider as well as the pillion. The riding posture is quite standing, with comfortably positioned foot-pegs for the pillion. The Gusto comes with quite a few features, such as remote flip key with LED flashlight, height adjustable seat, lamps and guide lamps. This gusto is available in four colors such as magnetic magenta, iceberg white, volcanic red and galactic black. The Mahindra Gusto is powered by Mahindra’s M-TEC engine which is a 109.6cc air-cooled single-cylinder engine and 9 Nm of torque at 5500 rpm and that generates 8 bhp of power at 7500 rpm. The engine is mated to a CVT transmission, which transmits power to the rear wheels. The Mahindra Gusto uses a telescopic suspension with an air mechanism system up front, while the rear segment employs a coil type hydraulic suspension system. 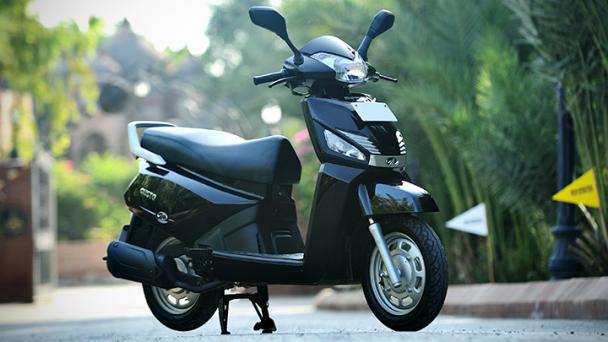 Gusto leads ahead of all the other competitors with its exclusive seat height adjustment feature. The seat height of Gusto can be lesser by 35 mm very conveniently and the driving becomes simple even for a person with short height. The large twelve inch tires used on Gusto makes it more smooth ride over the other challenger and also it features telescopic suspension at the front, making it trouble-free over the bumps and potholes. A completely analogue instrument console has been used on the Mahindra Gusto. It is enclosed in a very good colored plastic cabin, with separate compartments for fuel gauge, speedometer, and the led indications. The console has a quick storage space below it and which can be slides out to place some small things like sunglasses or phone. This was a first time feature to be in a scooter in gusto. Mahindra has been stressed hard to stay up in the scooter market from a long time and this time, they brought something actually interesting, making the user think once before going for some other option. The new Mahindra Gusto is a feature crowded scooter having some things which other scooters can’t even dream of having at present. After all these appearance, the price still competes all and the market plan is expected to bring some modify to the company sales.

Mahindra has offered an abundance of safety features on the new Gusto which include the guide lamps and which turn off after sometime while you park the Gusto at nighttime. The flip key of the Gusto has a led light which helps in the keyhole lighting at night. It comes with 130 mm drum brakes for both the front and rear tire. By pressing the button on the flip key, find the lamps blink and beep in order to show accurately where the Gusto has been parked at night. More than that, this section is preferred by customers looking for a daily commuter springy healthy economy to save on their monthly expenditure on fuel. With all these things in mind and of course considering that pricing could not go beyond the reasonable limit, Mahindra spun off Gusto a couple of years ago. Touted as a global model, Gusto sports decent design although it is not very attractive but it is on par with other models in the volume segment. For power generation, the gusto employs a 110cc engine mated to an auto tranny when compared to other bikes.

A Gist On Custom Coins

The Advantages Of Hypoallergenic Dog Breeds

New Movie Trailers You Must See In This June

What Rolex Watch Repair Is Important

Things To Consider Before Restoring A Car

Consuming In Restaurants No Better Than Fast Food For Wellbeing