The city of Hvar is located in a bay on the Southwestern part of the Island of Hvar. It is faced to the south unlike its neighboring counties of Stari Grad and Jelsa, which are turned towards west and north. South of the city harbor there are Paklinski otoci. Hvar has a several thousand years old history. The richness and its contents are a result of different circumstances and advantages of Hvar, with nautical position of Hvar’s harbor being the most important. From the very beginning of wind-sailing, the Island of Hvar is at the very center of naval routes of the Adriatic, while the city harbor of Hvar, protected by small islets and perfect natural form, provided the ships with safe sanctuary from devastating winds. 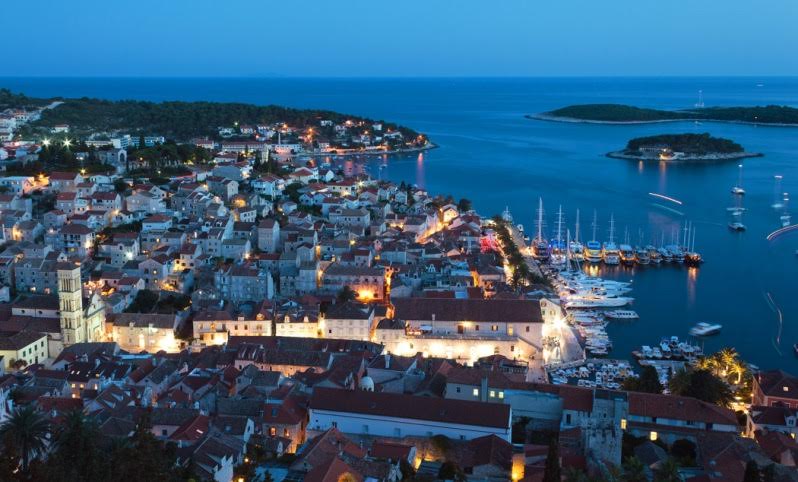 Anyone can find his quiet place which will rest his body and soul, which is why 140 years of organized tourism has been celebrated recently. Staying in untouched coves near the city which can be visited by car, bike or inspirational walks through the mediterranean landscape is truly unique experience of Croatian touristic offer. You can swim in the coves, and almost each of them has a restaurant or suitable place for refreshment. When you add high-quality accommodation and Mediterranean hospitality and service to the charms of nature, Hvar becomes and ideal destination for relaxation with friend, couples and families.

Transportation on the Island of Hvar

The bus station in the city of Hvar is right behind the Cathedral, which connects Hvar to all other major locations on the island. Most lines are connected with Stari Grad, Jelsa and Vrbosko. Around pet to six trips are organized, and the number increases during the summer. There are occasional lines with Suæuraj and more often to the ferry port in Stari Grad.

The Cathedral in Hvar

It was proclaimed as a cathedral in 13th century when the bishop moved his seat from Stari Grad to Hvar. The bishop’s court and a museum with valuable sacral objects and icons are located next to it. The renaissance bell-tower makes this church temple recognizable which is one of the most beautiful bell-tower of this kind on the Dalmatian area.

The Theatre of Hvar and the Arsenal

Today’s outer form with large arch on the facade of the western sea side was built by the Venetians in the second half of the 16th century. In the beginning of the 17th century in 1612, on the floor above the Arsenal, the oldest public (folk) theatre in Europe was built as an indirect consequence of the development of drama in Hvar with its most famous representatives Hanibal Luciæ, Mikša Pelegrinovi, Marin Gazaroviæ and Martin Benetoviæ. The plays were shown at first in the Cathedral and in public areas such as Pjaca and later the Duke of Hvar, under the influence from Italian theatres, built an area for performing the plays from national literature such as Robinja, Jeðupka and Hvarkinja.

The Franciscan Monastery in Hvar

The construction of the church was funded by the captains of the Venetian galleys and he noblemen of Hvar, while Hanibal’s grandfather donated 1000 ducats for its construction. The arch and rosette on the relief of the Lady, the work of Nicolas of Florence, are still in its original form. In front of the main altar there is a grave of Hanibal Luciæ, ‘the most famous son of Croatia’. Inside the monastery you can find church book, mass vestments, manuscripts, numismatic collection and a rich collection of paintings from the old masters, with the famous ‘The Last Supper’.

5 Best Places To Grab A Pint In Australia