When it comes to search engines, the only though insignificant but noteworthy rivalry Google faces is from Bing. The latter has been trying to increase its market share and rise up to the level of competing Google since its launch in June 2009.

Bing has long been in competition with Google. As of now, the market situation stands at: 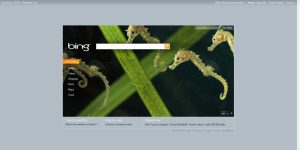 The stats clearly show that Bing is far behind Google in terms of market share. This is why most of the search engine marketing service providers, target Google instead of going for Bing. The lines below explain the major differentiator Bing carries, along with the changes Bing is about to roll that most probably will change the market share situation for Bing.

It is the prime advantage, which Bing has over Google, as Google does not have any access to personal data of such platforms. The results displayed by Bing, are an outcome of an algorithm that takes into account the information from social networking platforms from the likes of Twitter and Facebook. This is the only edge Bing has over Google.

However, despite the edge that Bing has over Google, it still hasn’t been able to call itself successful, or has had a chance to compete with Google in a real sense. Bing plans to fill in this discrepancy with the latest layout it is to roll out on 15 May.

On May 15, 2012, Bing is to run the test phase of its display changes. Anyone who wants to try out the new display can request for an invitation. The new Bing search result display is divided into three parts.

The left column of the three parts search results carries the same blue links of organic results. The results displayed are what Bing finds most relevant to the search query.

The middles section of the new layout is called ‘snapshot’. It is a place reserved for task completion such as:

This feature won’t be available to the users in the testing phase. However, once the feature goes on live, the snapshots will provide a view of hotel rooms if you are looking for a hotel, times of movies, if you have searched for a movie.

The third distribution of the search results comes in the form of a sidebar, which the users logged into Facebook could use to see the recommendations of their friends for their search term. Sidebar is the area where the role of a social media marketing firm comes in. the sidebar comes with three prominent features:

In a nutshell, although till now Bing has proved to be an insignificant opponent to Google, however, with the launch of the new layout, Bing hopes to pace up the increase in its market share, if see a dramatic increase.

Rise of Bing and Its Situation in US Market