Guruvayoor is a small town in Kerala, much known for its ancient Guruvayur Sree Krishna temple which is said to be 5,000 years old. The number of pilgrims remains so high here that it stands 4th in terms of the amount of visitors in the entire country. Read on.

Guruvayoor, which is also spelled as Guruvayur, is a religious town in Thrissur in the state of Kerala. It is home to the famous Guruvayur Sree Krishna temple which is the fourth largest temple in India when it comes to the number of visitors. Hotels in Guruvayoor remain occupied yearlong and most of the accommodations are booked in advance. Even the hotel names in this spiritual place are based on Hindu Gods. For example, Hotel Devaragam, Krishna Inn, Gokulam Resorts, etc. It shows the deep faith and religious tenor of the place. It is believed that Guruvayoor is a very ancient town and the temple is about 5000 years old. Some legends claim that Lord Krishna asked two sages of those times to take his idol from Dwarka to Kerala, as Dwarka was being ruined. A medieval era text based on Bhagavata Purana, written in Sanskrit and known as Narayaneeyam mentions Guruvayoor as the place of worship and it is from this source that the place got its nationwide popularity. Hotels in Guruvayoor offer guides on request who can help you understand the history and significance of this town. 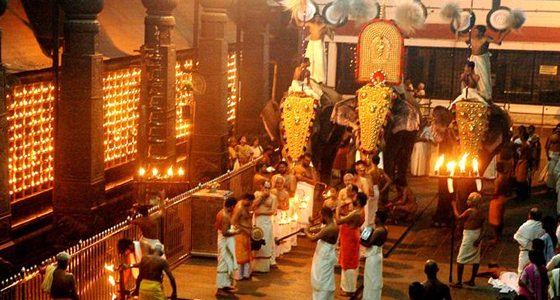 Why visit Guruvayoor or Guruvayur: Every once in a while it is important to take a break and go on a vacation. In India, people mostly travel on long distance trips during the summer vacations since that is the period when your family can get a chance to be together for a tour. Holidays, however, are not limited to summer vacations and hill stations. With its diversity, there are many places in the country that are popular choices for tourists and travelers. The most common type of tourist place in India is a religious site. Temples, mosques, ancient worship sites, old era churches, etc. are seem not only as historically important, but own a huge cultural significance for the people. The pilgrims flock to such places of various religions to offer some prayers and to indulge in an act of devotion toward their deities. There are hundreds of religious places across the country which remain bustling with visitors throughout the year. Rituals, ceremonies, and festivals are celebrated at such places with great divine fervor. Even people from abroad make a visit to these sites.

It is believed that in the past, it was a custom to visit all the major religious places of one’s deity once someone entered their old age. It was a way of recalling their lords and surrendering themselves under the refuge of their blessings. A number of folklore around such a custom are mentioned amongst the common people. The tale of Shravan Kumar is one such example. People visit religious sites in order out of their gratitude toward their gods. Historians, scholars, theologists, and even people with some cultural and religious interests come to the places of devotion in large numbers. It is an experience to see millions of people demonstrating their faith through the rituals and prayers. Guruvayur is a vibrant place. Places to visit in Guruvayur and be a part of are quite a few. You can visit the Mammiyoor temple and witness some of its festivities. The town holds ceremonies such as Guruvayur Ekadasi which is celebrated on every 11th day of the lunar fortnight. Chembai Sangeetholsavam is another festival which showcases carnatic music. Punnathoor Kotta Elephant Sanctuary is one more attraction near Guruvayur.

Guruvayoor is connected to Kochi by NH 17 and to Thrissur by SH 49. It has its own railway station. Nearest is the Cochin International Airport about 87 km away.

Author Bio: Sandeep is an experienced travel writer and enthusiast blogger. He has explored many known and less-known places in India in the last 10 years. His experience adds to his expert knowledge on the best Hotels in Guruvayoor , different travel routes through trains, flights, and road. He also specializes in off-beat places to eat and stay at. He also advises amateur tourists on travel tips.

Getaways Do Not Mean Spending A Ton Of Money

The Best Way To Get To and From Brisbane Airport

Great Money Saving Tips For Your Next Trip

How Shiraz City Is Different from Other Cities In Iran