In an effort to attract consumers, engineers continue incorporating space-age technology into everyday products. With new advances comes things that we never thought possible. The electronic advances contained within many of today’s available appliances rivals the capabilities once only found in science fiction. Here are just a few that you can start ogling at right now.

Manufacturer LG recently introduced the “Home Chat” smart platform that provides consumers with the ability to interact with appliances via text message or voice commands. Using the specially designed technology, users have the ability to control many different appliances including dish washers, refrigerators or washing machines. Imagine being at the grocery store and asking a refrigerator whether you need milk or eggs.

While 3D TVs were once considered the ultimate in television watching, the OLED Ultra HD TV takes viewing another step further. The organic-light-emitting diode technology promises a sharper picture on a thinner display that conserves utility bills through lowered energy costs. The newest models feature 105 to 120-inch glare resistant screens. However, the sets weigh only around 100 pounds. Unlike older, blurry projection type TVs, the OLED displays are four times clearer than HD models. 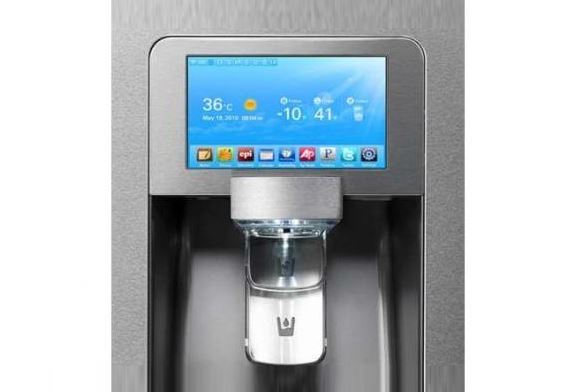 Three-dimensional printers have found a number of different industrial applications, but the ChefJet provides chefs and chocolatiers with the chance to create a variety of unique 3D treats via two separate countertop versions. The ChefJet Pro features an internal build area measuring 10 inches x 10 inches x 8 inches and has the ability to create goodies in multiple colors. Using sugar and water, the machine builds treats layer by layer in flavors ranging from chocolate to watermelon.

The Air Fryer offers consumers a means of enjoying popular crisped foods without all of the fat and calories. Using hot air and roughly one spoon of oil, the device heats, cooks and stirs food with a mere push of a button. However, in addition to preparing the perfect French fries, the Tefal is also suitable for curries, stews or other dishes.

The latest refrigerators not only preserve food, but also come equipped with a few innovative extras. With dual cooling systems, fridge and freezer air remains separate, which prevents odors and flavors from traveling from one compartment to another. New glass shelf designs have sealed edges that adequately contain spills and make clean-up easier. Door bins now have taller compartments that allow for storing gallon-sized milk containers or two-liter bottles of soda. Some fridge models also provide the option of accessing drawers without having to open a door.

Having great appliances is an art form for some people but keeping those expensive items safe is a job best suited for The Self Storage Place. The item listed above are but a handful of appliances that were featured in the International Consumer Electronics 2014 in January. If you consider yourself pretty well versed in all things technological then following this expo is the thing to do. Next year’s presentation is already in the works and promises even more amazing appliances.

Computer Hardware: Desktops and Notebooks and Handhelds – Oh My!

A Checklist for Used Computers

This Is Why I’m Hot: Cloud Computing this Generation’s The Defining Trend In Tech