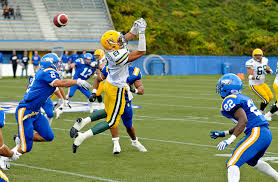 Three significant things you should know about when it comes to learning football basics are the defense, offense and special teams. Even if you have never watched a game, due to the awe-inspiring popularity in America, most of us know a little something about football. It is loved by millions and is known as one of USA’s greatest pastimes. The general basics of the game can be easily picked up, but the basics behind the defense, offense and special teams can be puzzling.

On the field, the offense consists of the players who are trying to score. Depending on the play, it determines which players of the offensive line are on the ground. The one player who will stay in the lineup is the quarterback. While every player performs a significant role, his is a vital part of the offense. The quarterback runs either a running or passing play, and depends on the offensive line to defend him and follow through with the play. To move the ball 10 yards, the offense has four downs and remains on the field as long as they carry on moving the ball far enough at each down. According to football fan Radha Singh, the objective is to score a good enough position or a touchdown at least for special teams to score a field goal.

The opposing team’s defense is the other group of players on the field. Their main objective is coverage and tackle. Three of the greatest common defensive plays consist of Blitzing, where five or more players rush the quarterback, Man to man where it comprises of mainly one on one coverage, and Zone where the defense rests on a certain part of the field while the play is ran around them. The main aim is to stop the other team from making a touchdown or being at field goal range.

Special teams comprises of three diverse parts. On the field during the kickoff, every game starts with special teams and they are brought back on top of the field at each change of possession after points are scored. The special teams is brought back onto the field for a punt only if the quarterback is unsuccessful at scoring points within four downs. If a team is not able to make a touchdown but they are in the range of field goal, special teams are used to kick a field goal or if the touchdown was made they can also be used to gain an additional point. Special teams comprises of a defense and offense as well. Blocking field goals being the defense’s job, and returning punts when there is a kick off and the offense’s job beings punting, kickoff, and field goal attempts.

Now that you have a better understanding of the basics behind the defense, offense and special teams, it should be easier to follow an actual game. Learning all the rules of football can be annoying, but if you comprehend the basics it will not be so devastating. As Radha Singh says, mainly the basic concept of football is to score more points than the opponent team, and the only way to do that efficaciously is to play as a team.

Where and How Are You Most Comfortable Playing Video Games?

Best Films You Should Watch During Your Wedding Anniversary