We can sometimes forget just how similar to humans dogs really are. Yet the canine species, as a domestic companion to humanity, has grown up and developed alongside us for thousands of years, and in many ways we are symbiotic and very similar indeed. Indeed, dogs mirror us in a variety of ways; perhaps this is to help them connect and live with us better, but that means that not only are dogs very understanding of humans but they can experience the same negative emotions that humans are subject to.

Most problematically, dogs can sometimes struggle with depression, which can very strongly affect the quality of life for your dog. To combat this, it is important for you to be aware of what qualifies as a sign of depression in your dog in order to help you diagnose and remedy the condition.

Some Symptoms of Canine Depression

Just as there are signs of depression in humans that you can keep an eye out for, there are signs of depression in dogs that you can just as easily recognize in order to determine if treatment is necessary. Dogs, after all, have bad days and bad moods just like humans, so observing these behaviors over time and noting when they are particular troublesome to the dog is an important part of this diagnosis process.

Generally speaking, you can expect that a dog that is in the midst of depression to become withdrawn from the world around them. They will stop interacting with friends, owners, and companions, including both human beings and other dogs and animals in the home. Normally, dogs are very playful and social beings, but just as humans become withdrawn when they are depressed, so too do dogs.

Dogs also become remarkably inactive when they are depressed, just as humans often become lethargic and find it difficult to summon the energy to accomplish much of anything. A dog who has become inactive won’t be interested in taking walks, exploring their surroundings – as they are often wont to do when they are in a new or unfamiliar environment! – or in playing, whether with their toys, with you, or with their friends and companions. They may move slower, be loath to run, and meander about without purpose. 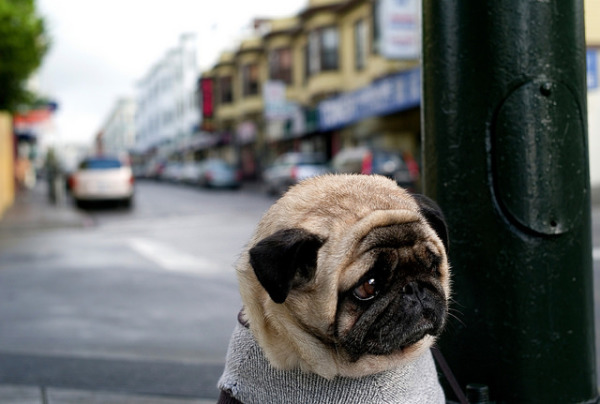 Similarly, a dog’s appetite will change, where they will eat less, leading to an unhealthy amount of weight loss. On the other hand, a depressed dog could eat considerably more, which when combined with their lack of movement and energy, can lead to increased weight gain. These are symptoms seen in humans when they are depressed, and they lead to quite dangerous health conditions for dogs. Generally speaking, this is a serious sign of depression.

Finally, dogs that are depressed will often exhibit a change in their sleeping habits. They may sleep quite a bit more, napping throughout all hours of the day and barely waking to do more than eat a bit and go outside for a few moments. Alternatively, they may be restless and find it difficult to sleep. Increased sleeping time or insomnia are both symptoms of depression we see in humans quite often.

In a nutshell, if your dog seems lethargic, like they are moping around, like they lack interest, direction, and energy, and that this has gone on for some time, they may very well be depressed. If so, get them to a vet! A professional will have the answers you need to help properly diagnose your dog’s condition and help you help him/her out of it!

+Neil Kilgore wants his dog to be healthy and happy! He regularly blogs about dogs, breeders and puppies on the Greenfield Puppies website.

Way To Use Webcasting In Business Environment