3D printing has been hailed as the future of manufacturing. Also dubbed ‘additive manufacturing’, it works by building up layer upon layer of plastic material to create objects based on the design blueprint. The idea behind 3D printing is that instead of buying good from manufacturers, consumers will now be able to print their own goods at home. Now take into account a group called Defense Distributed, , has printed the first gun made with 3D printer technology; is this a great

Defense Distributed, headed by Cody Wilson a 25-year old law student at the University of Texas, and his group took eight months to design the 3D gun they called “The Liberator”. The gun is made entirely out of plastic except for the firing pin that is made of steel. The group claimed that it can fire standard handgun rounds, which was proven when it was successfully tested at a firing range in Austin, Texas. 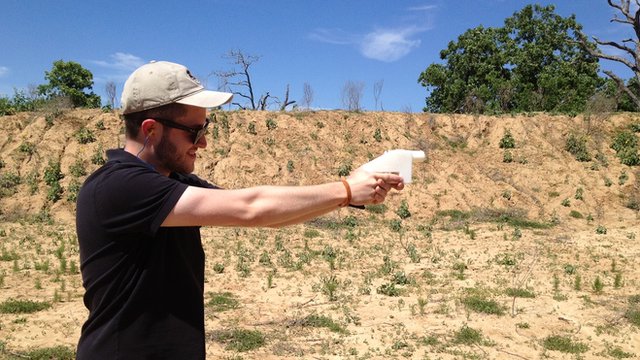 In a report of Forbes.com, they mentioned that the Liberator is “capable of connecting to different barrels” which means it can take a variety of calibres of ammunition. Defense Distributed plans to make the blueprints available online so people at home will be able to print their own. Wilson told BBC that his plan to make the design available was “about liberty”. He also mentioned that he recognizes that the gun might be used to harm other people but adds that it is the purpose of the tool and did not feel any sense of responsibility about whose hands those 3D printed guns might fall into. In light of the recent gun violence in the States, it begs the question: “should some technological advancement not be made available to the public?”

Various groups against gun violence expressed their concerns about this issue, as well as United States Congressman Steve Israel, who called for a ban on 3D guns under the Undetectable Firearms Act. Non-government organizations such as New Yorkers Against Gun Violence also released a statement saying that “These guns could fall into the hands of people who should not have guns – criminals, people who are seriously mentally ill, people who are convicted of domestic violence, even children.” They also added that law enforcement agencies should look into this, and they should have people monitor emerging technologies such as 3D printers, as they can be used by criminal organizations.

Currently the most affordable 3D printer available on the market costs around $1300; but these prices are predicted to fall as the manufacturing of 3D printers drops. Once they do become readily available and anyone can manufacturer a 3D gun which is capable of firing standard rounds of ammunition, will you feel safe?

This is a guest post by Cartridges Direct, where to go when you need genuine printer ink and toner cartridges.

Finding The Best Popular Posts and Stories For Diversion

This Is The Way Metallic Colors Catch The Eye