Trigger finger or stenosing tenosynovitis occurs when the tendons in the thumb or the finger becomes inflamed.

The tendons are tough tissue bands that connect the bones and the muscles. Together, the muscles and the tendons in the arms and hands straighten and bend the thumbs and the fingers.

Typically, the tendon easily glides through the sheath (the tissue covering) because of the synovium. The synovium is the lubricating membrane that surrounds the joint.

However, there are instances when the tendon becomes swollen and inflamed. When this occurs, bending the thumb or the finger will pull the inflamed tendon through the narrowed tendon sheath.

This results to a pop or snap.

The course of treatment that will be recommended will often depend on the severity of the condition.

Trigger finger is often attributed to forceful use or repeated movement of the thumb or finger.

Gout, diabetes, and rheumatoid arthritis have also been associated with the condition.

Some of the factors that increase one’s risk of developing trigger finger are the following: 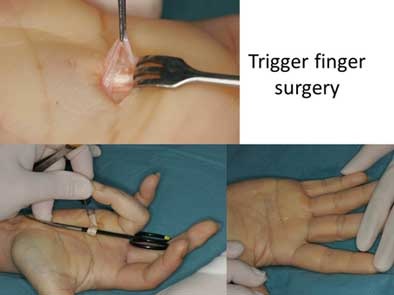 Common manifestations of trigger finger can include:

Diagnosis of the condition often does not involve elaborate testing. A physical examination and your medical history would often suffice.

During the examination, expect to be asked to close and open your hand. This is done so the doctor can check for evidence of locking, smoothness of motion, and areas of pain.

Your palm will also be checked for lumps.

Lumps that are associated with trigger will often move together with the finger because it is attached to the tendon.

Nonsteroidal anti-inflammatory drugs (naproxen and ibuprofen) are often given to provide pain relief. However, it won’t be able to relieve the swelling and inflammation.

If conservative noninvasive treatments are recommended, it can include the following:

Surgery and other procedures

For those with severe symptoms and those patients whose condition does not respond to conventional treatments, the following might be suggested:

Trigger finger surgery – The surgeon will cut open the constricted tendon sheath section through a small incision in the base of the affected finger. This procedure is often done in the operating room.

Percutaneous release – After the palm is numbed, the doctor will insert a needle into the tissue. Moving the needle and the finger will help break the constriction. This treatment is often done under ultrasound control so the tendon sheath will be opened without damaging the tendon or any of the nearby nerves.

The Foods That Helps Your Psychological Health Growth

How People With Disabilities Can Maintain Their Mental Health?