About a month ago, Apple unveiled two new iPhone models – the 5c and the 5s. Since their release, people have been slightly confused about the differences of the two phones (beyond the colors, of course). To understand how each model differs from the other and to help you choose the right one for you, check out these differences and examine which ones matter to you the most. 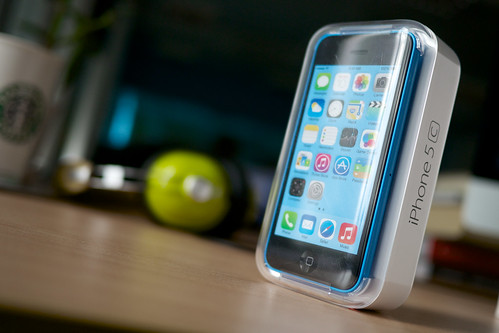 The iPhone 5s, sporting an Apple A7 processor, is faster than the 5c, which has a 1Ghz Apple A6 at the heart of it. The A7 is a newer and more powerful model than the A6, especially because it has a 64-bit chip (the first in a smartphone). With the 64-bit chip, the A7 can process about twice as much information simultaneously as the 32-bit A6.

The iPhone 5s is the first iPhone to introduce and include a motion co-processor. What this chip does: It interacts with the phone’s physical sensors (accelerometer, gyroscope, and compass), providing new options and feedback to applications. With this chip, you can get more detailed exercise and fitness applications, because the phone has the ability to know whether you’re standing or sitting. Although there aren’t many applications made for it yet because it’s such a new feature, it could be an asset.

One of the iPhone 5s’s most talked about features is the Touch ID fingerprint scanner that’s built into its home button. The scanner lets you secure your iPhone with your unique fingerprint, making sure no one except you has access to your phone and the content in it. Simply use the scanner to unlock your phone and enter additional passwords for added security. As of right now, the fingerprint scanner is not available for the 5c.

If you’re just looking at the specs, the iPhone 5s and 5c cameras don’t look much different from one another: both max out at 1080 HD video and 8 megapixel still images. The differences in both cameras is noticed once you start studying what’s inside of each phone, or underneath their proverbial hoods.

The 5s offers dual-flash for more brilliant colors, along with the ability to record slow-motion video at 120 frames per second in 720p HD. You can also snap up to 10 pictures per second. Unfortunately, the 5c doesn’t offer any of these additional features to its already great camera.

If you want to step outside the box and buy a colorful iPhone, consider the 5c model. This phone comes in many colors including yellow, blue, ink, green, and white. Although the iPhone 5s has more colors than older models have – it now has a gold option in addition to the standard slate of colors – the 5c models have the brightest colors and the biggest selection of them. If you want to stand out based on your phone’s color, consider buying the 5c model.

The iPhone 5s has the same storage capacity (64GB) as last year’s iPhone 5. If you want to store thousands of songs, hundreds of photos, dozens of applications, and much more, then 64 GB is more than enough to satisfy your storage needs. If you’re storing even more data and information, then you definitely want to buy the 5s model. Although the 5c model matches the 16GB and 32GB models of the 5s, there’s no 64GB model of the 5c available to iPhone users.

Now that you know about the differences between the iPhone 5s and iPhone 5c, which phone do you picture yourself buying in the future? Whichever you decide, you’re sure to get a state-of-the-art device that can do just about anything that you ask of it.

Battle Of The Techs: A Look At The Never-ending Battle Of iPhone vs. Android

Why Go Wireless With Your ISP?

An Overview of Mobile Wireless Computing