A hydraulic jack is a jack that uses a liquid to push against a piston. This is based on Pascal’s Principle. The principle states that pressure in a closed container is the same at all points. If there are two cylinders connected, applying force to the smaller cylinder will result in the same amount of pressure in the larger cylinder. However, since the larger cylinder has more area, the resulting force will be greater. In other words, an increase in area leads to an increase in force. The greater the difference in size between the two cylinders, the greater the increase in the force will be. A hydraulic jack operates based on this two cylinder system. 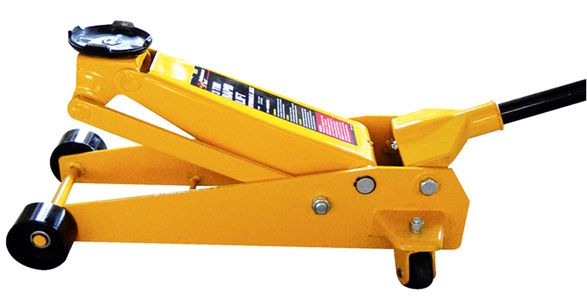 One of the most common uses of a hydraulic jacks is the hydraulic car jack. These are much easier to use than traditional screw jacks. When using a hydraulic jack to change a car’s tire, be sure that the car is in park. If the car has a standard transmission, be sure that it is first gear or reverse. Locate the jacking point. This is usually about a foot behind or in front of the wheel that you want to change. Place plywood on the ground to form a stable surface. Put the jack on the plywood. Do not place the jack directly on asphalt or it will sink into the ground. Release the locking mechanism on the jack handle. Pump the lever to jack up the car. Keep raising the car until it is about two inches off of the ground. Insert the jack stand under the car. Change your tire. Remove the jack stand and lower the car using the hydraulic jack.

Hydraulic jacks are commonly used in a range of home, manufacturing, maintenance and technological applications. Most notably, hydraulic jacks are used to lift heavy objects, such as cars or machinery, to access hard-to-reach places for construction or repair work.

Contractors For Residential And Commercial Roof In Troy Michigan