The mere presence of Roaches makes one cringe. If not all then most of the population is so not want to be in acquaintance with them. Roaches are mostly found in the kitchen where food is present or near the waste deposits. Roaches are mostly famous for their cringe-worthy looks, unpleasant odors and of their creepy sounds. These pest cockroaches are not only ugly in appearance and an embarrassment but also carries various diseases. It’s imperative that you take some precautionary as well as some corrective measures to get rid of them.

Roaches are creating havoc in the houses of Central Arkansas, crawling on the tables, over the walls and even onto the bed. These roaches are the carriers of disease and harmful for our health which are described here:

Boosts Disease Causing Bacterias – Cockroaches recapitulate their own saliva and fluids from their mouth while feeding on our foods. At the time of feeding they  infects your food with the insects and further boosts the production of bacterias that causes diseases. It has been stated that there are some bacterias that multiplies in the gut of cockroaches that can cause urinary tract infections and digestive problems.

Contamination of Food – Roaches feeds on the food we eat along with on dead plants, animals, soap, paper, fallen hair and many other things as they are known to live by eating anything. At night, they contaminate food that is left open by excreting on it and leaving hair and dead skin while depositing empty shells in it.

Food Poisoning – Cockroaches are the popular agents of food poisoning. They are the home of Salmonella bacteria which causes typhoid and food poisoning by infecting open food.

Allergies – Cockroaches can also cause allergies as their body parts and saliva secretion contains hundreds of allergens. These allergens can trigger some undesirable reactions in your body such as watering eyes and rashes on skin.. It also aggravates allergies especially in children and sensitive individuals.

Asthma – Cockroaches effects quite severely and adversely on asthmatic people. The allergens produced by cockroaches can affect you quite harshly and bring out some extreme complications that can even be life-threatening. People who aren’t asthmatic are also in danger here as they can develop asthma by inhaling these allergens. 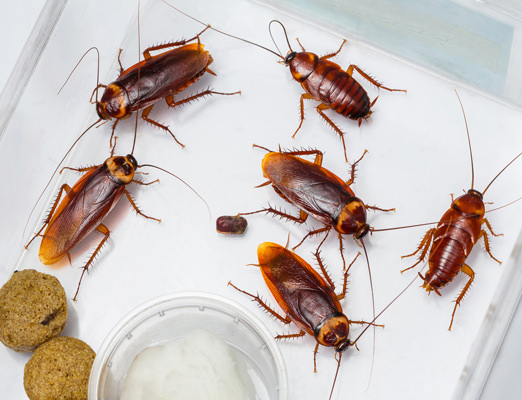 How To Get Rid of These Roaches

As there are lots of roaches in Central Arkansas and are hazardous for our health, there is need to take some strong steps in this direction to keep your house roaches free. These actions are described below:

It’s a crucial task to get rid of  the cockroaches through house cleaning and pest control methods to disinfect your house and to live a healthy and safe life.

How Can Lifesaver Bottle Keep You Healthy?

What Should You Eat Before A Workout?

5 Skin Diseases That Are Often Mistaken For Acne