Every hostess knows that the right type of dinner plates will add all the correct drama and pomp and circumstance to a dining table. China that espouses brilliant design and colour will elevate an ordinary every day meal into something much more spectacular. Fine China has become an object of desire for Kings, Queens, Brides, Chefs and the British Hostess yearning to impress.

You only have to read “Dish 831 designs” to realise that the art of the everyday or not quite so everyday china, is indeed an art form, and one that we seem to whole heartedly celebrate. As my Mother used to say, “Breaking out the fine china” always meant that we were in for a spectacular and highly tasty dinner and fun filled evening.

“Dish” portrays a plethora of designs that range from the first wooden trenchers of the Middle Ages to the 17th century China trade.  The author Shax Riegler offers beautiful descriptions on the dinner plate. It may well be just a vessel for delivery but the designs are just as tasty as what is served upon it. The plates created by storied masters such as Spode and Wedgwood, modernists like Russel Wright and Homer Laughlin, and even today’s contemporary designers like Vera Wang and Diane von Furstenberg. 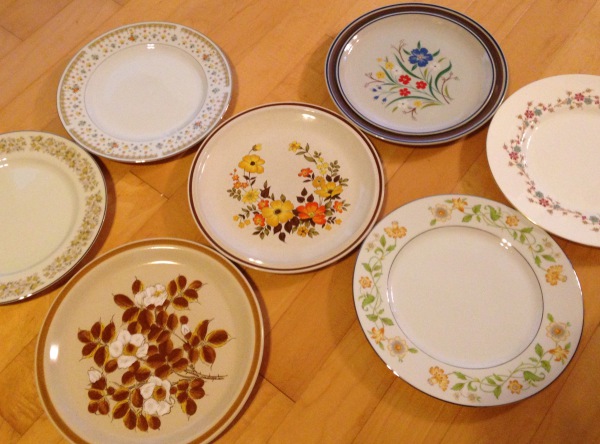 The book shows them all off and is a feast for the eye. It also includes a list of the top 100 patterns of all time. I don’t think after devouring this book that I will ever look at the common dinner plate in the same way again.

So when did the dinner plate originate? Dinner plates were traditionally made from porcelain or earthenware and have been in existence since the 5th century. Of course at this time, it was more about serving something to eat, rather than the fine dining that we can now experience. These plates were made from old stale bread.

Dinner plates as we know them now, originated from China with the discovery of porcelain in around about the 600’s. These Chines potters were able to create decent porcelain due to their developed knowledge of glazing and the availability of kaolin clay locally. The opening of the trade routes in the 14th century allowed the commodity to be exported. Chinese dinner plates and tableware was popular across Europe.

It wasn’t until the 18th century when European potters started to design and manufacture porcelain plates themselves, it took them many years to emulate the porcelain making process. These were only really available to elite sectors of society, who had the wealth and the time to enjoy and appreciate them. Between the years of 1815 and 1898 dinner plates were properly mass produced and became an affordable commodity to the general public.

The functionality of the dinner plate is interesting, throughout history, china served as both decoration as well as a food delivery system. It wasn’t until the 19th and 20th centuries that china becoming fashionable as pieces that were commemorative or antique.

Harry Price is a talent writer from the South Coast.  He loves Running, Sailing and Swimming although not all at the same time!

5 Tips To Apply Your Hair Product The Right Way!

Choosing To Become A Surrogate Mother

Why Lifestyle Design Is The Way Of The Future

5 Fashion Accessories That Will Get You Noticed