After months of leaks and rumors, one plus 3 has been finally launched at a price tag of Rs. 27,999 and it is available at Amazon India with lighting deal tag. The Successor to one Plus 2 brings new unibody design, latest powerful software and high end specifications but the head turning point still remains the massive 6GB RAM. One Plus has removed the tiring invite system; it is now available via Open sale format. We’ll be comparing with another flagship in its segment Xiaomi Mi 5 which share lots of component and features with One plus 3. 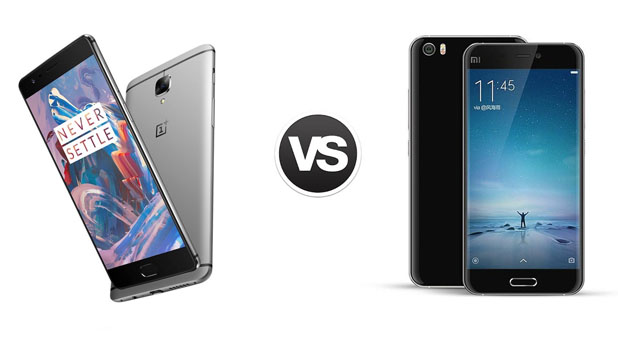 Both the flagships get Qualcomm Snapdragon 820 processor coupled with Adreno 530 GPU. Xiaomi has launched only 3GB RAM variant in India while china it is available with 4GB RAM version with multiple storage options.

On the other hand, one plus 3 is available in single variant i.e. 6GB RAM with 64GB in-built storage. Both the Smartphones doesn’t support Micro SD card but the flagship killer from one plus wins here with both hands down considering more RAM and internal storage.

For photography, Mi 5 features a 16 megapixel rear camera with dual tone LED flash, PDAF, OIS and 4k video recording. For Selfies and Video calling, it has 4 ultra pixel front snapper with f/2.0 aperture. On the other hand, one plus 3 also sports a 16 megapixel rear camera with LED flash, Sony IMX sensor, OIS, PDAF while front is equipped with an 8 Megapixel Selfie camera with f/2.0 aperture, wide angle lens. In real world Mi 5 cameras perform well while we have not tested one plus 3 yet.

In terms of connectivity, 4G LTE, USB type –C port, Dual SIM, NFC, bluetooth, Wi-Fi and GPS are common features on both. The One plus 3 is armed with 3000mah battery which supports fast charging and dash charger to fuel the battery up to 60 percent in just 30 minutes. Xiaomi’s beast also backed by a 3000mah battery with support to Qualcomm quick charge 3.0 support.

If we only go by the specs, the One plus 3 is far better choice though it comes with small difference over Mi 5 but it’s worth it. The Invite system has been removed which makes its availability rather easier, so if you’re looking for performance oriented 25K Smartphone then you should ignore one plus 3 at all.

Get the news and updates of latest smartphones launched and compare the phones to choose the best for you at Mobiblip.

5 Web Design Facts Sure To Leave You In Awe!