Modern healthcare is a worldwide crisis and the philanthropic organization, Doctors without Borders, just made a big statement to emphasize the severity of the crisis. They were offered, and then rejected the offer, of 1 million vaccines from Pfizer, one of the largest and most profitable pharmaceutical companies. Executive director of Doctors without Borders, Jason Cone, said the decision to reject the vaccines was not an easy one, but emphasized that free is not necessarily better.

These 1 million vaccines protect against pneumonia, which is the number one killer of children with an estimated fatality of 1.4 million each year worldwide. Since the introduction of PCV13, Pfizer’s most recent modification of the vaccine, the number of severe cases in the United States has decreased by nearly 90%.

Pfizer seemed rather shocked at the fact that an organization dedicated to providing care for so many people outside of the United States refused such a large donation. Doctors without Borders did it to provide a statement against the larger issue of the cost of vaccines and the monopoly that pharmaceutical companies have on them.

First, it helps to understand how vaccines are created, marketed and sold. Pfizer holds numerous patents that make it nearly impossible for competitors to make a vaccine to compete with theirs, allowing Pfizer to hold a monopoly on the vaccine without any competition or price controls to keep it affordable. Doctors without Borders, known as Médecins Sans Frontières or MSF outside of the United States, has made it a mission to obtain the vaccine since its introduction in 2009 with little success due to the steep cost. Donations typically include stipulations that determine where the vaccines can be used and who is able to receive them. 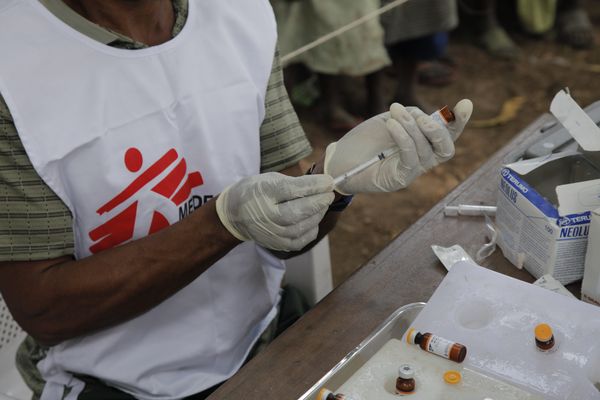 The donations also hurt others by giving big pharmaceutical companies a reason to increase prices for the general public and forces others to “pay up” while increasing the profits for companies such as Pfizer. In 2009 alone, Pfizer issued $13.2 billion to its stockholders, showing that they are most definitely not suffering financially. Other humanitarian organizations and developing countries that are unable to afford the drug suffer at the expense of others.

Accepting a donation this large hurts the movement to push for affordable vaccines that are available to everyone, not just the people who have deeper pockets. There is no bargaining power over the price of the vaccines since Pfizer is the only one that develops, markets and sells it.

The cost of the vaccine is astounding and it varies from one country to another, with a price tag of $63.70 in Morocco and more than double that at $136 in the United States. This ambiguity prevents organizations such as MSF from receiving an accurate quote for the true price of the drug. MSF would prefer not to receive donations, but to be able to purchase the vaccinations at a cost that is affordable to all to ensure the most people benefit. The fact that only one or two companies can produce these life-saving vaccines creates a monopoly that benefits the pharmaceutical companies at the expense of worldwide health.

The vaccine crisis is created by unaffordable access and a broken system that allows prices to remain high and competition to stay low or even non-existent. The World Health Organization is attempting to create a database of vaccine prices, but data is scarce so it is not yet an effective way to determine how much vaccines actually cost to develop and how much large pharmaceutical companies are charging for these life-saving drugs.

Mark Sadaka from Vaccine Injury Help Center, the leading Vaccine Injury Attorney, has a national practice and works with clients from New York to Alaska.

How To Record A Video Of Your Screen On Android?