In years gone by, IT hardware represented the kind of commodity that wasn’t approached lightly and in most instances was difficult and expensive to come by. These days however, things have taken a rather drastic 180º turn and the UK has fallen into an era when computers, parts thereof and consumer technology in general is picked up and disposed of with the same regard as a spent tissue. Of course, on one hand there’s the argument that cheap and affordable IT equipment has opened up incredible opportunities to more of the British public than ever before. But on the other side of the fence, what becomes of those tens of thousands of tons of equipment that gets thrown away each and every year?

The answer to the above question all comes down to the individual person’s approach when the time comes to rid themselves of their own hardware. It’s surprising, but even during times when the importance or recycling and reusing as much as we possibly can be concepts known and understood by most, an incredible amount of old IT equipment still finds its way into UK landfills every year. This is rather tragic not only because the UK is already running dangerously short of available space for such waste disposal facilities, but also because the overwhelming majority of what makes up IT hardware can be either reused or recycled. 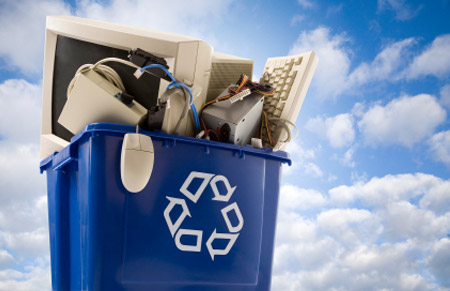 It might not have a place in your life anymore, but chances are it can be given a second life as something wholly more useful.

This is precisely why it’s of such importance to make a sensible and informed choice when it comes to the available redundant IT recyclers as all are by no means of the same calibre. You may think you’re doing the right thing by choosing any recycling service on the market, but in order to be sure that the goods you hand over are processed and recycled exactly as they should be, it’s important to look a little closer at your chosen service provider before going ahead.

For example, one of the most important things to look out for is a full disclosure from the provider of what it is they do with your IT hardware once it has been handed over. When and where there’s little more than a salesytagline begging for your business with no real information as to what happens next, there’s a pretty strong chance your stuff will not be recycled as well as it might be. By contrast, those at the opposite end of the scale will be more than keen to disclose exactly what they do, why they do and it and what happens next for everything you pass to them.

Never forget that when you dispose of any kind of storage device like a hard drive, making sure it is wiped clean of all your private data could not be of greater importance. It’s one thing to just hit the ‘format’ button before sending it away, but deleting data by way of the standard approach doesn’t actually remove any data from the drive…it simply flags it as disposable. As such, it’s a good idea to choose an IT recycling service that also offers a full military-grade data-wiping service to ensure that no matter what happens to your old hard drives and other devices, your data will not make its way into the hands of anyone but yourself.

One of the most immediate signs of a dodgy dealer in the recycling business is one that refuses to offer paperwork or any kind of receipt when taking waste goods from clients. Technically speaking there’s nothing to say that not being provided with a receipt or breakdown of goods handed over means you’re dealing with a crook, but at the same time those that recycle in accordance with UK law and uphold the strongest of ethics at all times will never fail to offer paperwork with every shipment received. So, if nothing else, it’s a good indicator of a quality recycling firm.

Last but not least, there’s really no sense in making the effort to load up the car time and time again to get all your old gear to the recycling centre when the best in the business will come to you 100% free of charge. Just be sure to double-check that if a collection service is offered, it is indeed free of charge – the last thing you want is to be lumped with a huge bill!

ideas for choosing your laptop computer

Is The MacBook Air The Best Option For Portable Computing?

The Importance of Hard Drive Shredding for Business