Bhaja Caves or locally known as Bhaje Caves, is located in the hills of Lonvala in Pune district. These are a group of some 22 rock-cut caves, created some 2000 years ago. Considered to be sacred temples to the ancient traders, who conducted their business from Deccan to Arab, these caves are majorly dedicated to Buddha. It is said to be believed that the ancient architecture and facade of the caves are inspired by even older cave temples, known as the Baraber Caves.

To visit Bhaja Caves, you first need to reach Lonavala. The hill station can be reached from Mumbai or Pune via train or roadways. Since Lonavala can be a little crowded with tourists, you can either choose Mumbai or Pune as your base. There are several five star, three star and cheap hotels in Pune and Mumbai, to pick according to your budget type.

Bhaja Caves is a complex of 22 smaller caves, which are known for their eclectic design and architecture. Carvings and paintings in each of these caves depicts stories and teachings from Hinayana Buddhism. One of the most important feature of these caves is its ‘Chaityagrha’ or the stupa, with a horseshoe shaped ceiling and wooden architecture. The stupa, infact, is a fine example and a little mystery, of architectural prowess of the cave creators. 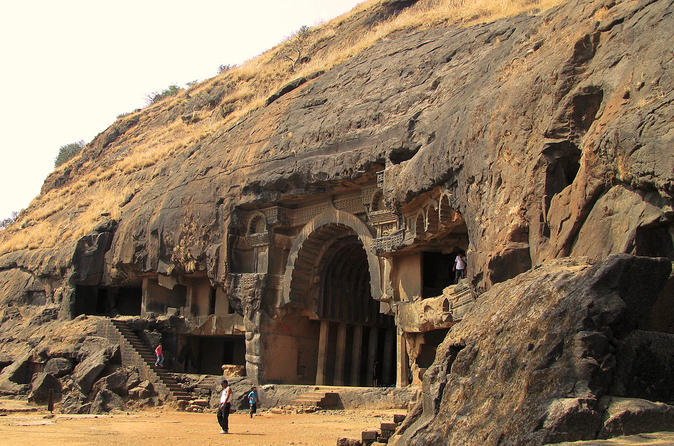 There are different carving on the stupa, which shows the life during that period, which comprises mostly of human figures engaged in various artforms – like a woman playing table and a performing dancer. These carvings also gives us a trace of what life was like around that period and instruments used in the daily life. There are some fourteen stupas in Bhaja Caves, which are chronicle of the monks who inhabited the caves. Names of prominent monks like Dhammagiri, Sanghdina and Ampinika, can be seen carved on the stupas.

The sculptures in Bhaja Caves will give you a glimpse on the fashion and lifestyle of the locals. Jewellery and accessories have been elaborately used in many sculptures. There are also several sculptures, along with paintings, of Buddha and his various forms. At a closer glance, one can examine that these paintings and sculptures were once coated in terracotta and smeared with paint, another amusing factor about the skills of the craftsmen. Some of the caves inside Bhaja also served as a ‘Vihara’ or an ancient Buddhist monastery. You can find few inscriptions, which could be teachings of the monks, carved on the cave walls. This shows the deep perseverance and preservation of knowledge of its creators.

So, if you’re looking to explore a historical place with amazing revelations, Bhaja Caves should always be in your travel list. Since Lonavala is a popular tourist destination for people staying in Mumbai and Pune, you can find from cabs Mumbai to Pune, Lonavala to Pune and neighbouring cities.

Congress Calendar In Cannes. Where Should I Stay?

Ways That Can Boost Up Your Logistic Company

Cheap Places To Stay In Salzburg