The Two Sides of their Character

In all the Tom and Jerry episodes, Tom plays several tricks to catch hold of Jerry. The fight between the two leads to a lot of destruction and disorder. Jerry the mouse is too clever and cunning and also he is often favored by luck. As a result, Tom fails in most of his attempts to trap Jerry. A very interesting as well as touching aspect in the Tom and Jerry shows is that at other times the two characters forget about their rivalry and get along as true friends. During such times both of them are concerned about the well being of the other. When they have a common task to fulfill, they set aside all their rivalry and work together. Because of the carelessness of the babysitter, the baby managed to came out of his control one day. At that time Tom and Jerry together took care of the baby and protected him from all dangers. 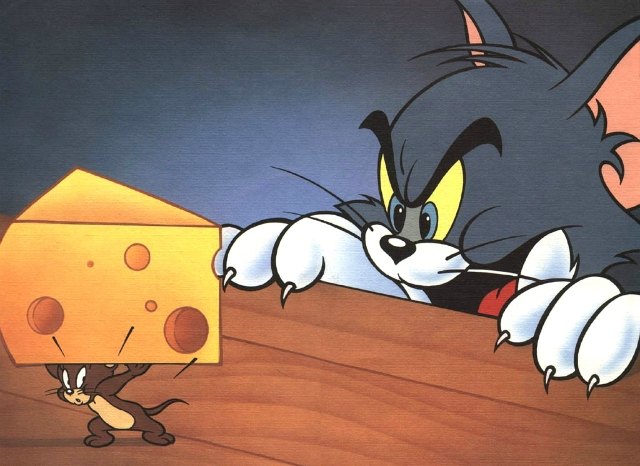 The severe clashes between the cat and the mouse had made the Tom and Jerry episodes very tense and noisy. Among this type of animated movies, Tom and Jerry cartoons are considered as the most violent because of this. During his attempts to finish Jerry, Tom uses powerful as well as dangerous devices like hammer, firecracker, axe, traps, poison and explosives. For his part Jerry retaliates very severely. Jerry is more confident about his actions since he is successful in his efforts many times. His gruesome methods to kill Tom include electrocution, setting off the fireworks after tying Tom to that, keeping matches in Tom’s feet and lighting them, pushing him to the ground with the help of electric poles, trapping him into the refrigerator, putting his tail into a mangle, pressing his head in a door or pounding him with a club. Though the violence never leads to bloodshed many people think that Tom and Jerry shows are too violent.

The musical part of Tom and Jerry cartoons is perfect. The musical sounds are effectively used to produce the relevant sounds and to give full audio effect to the actions. The music makes the episodes emotional. Classical, jazz and pop music elements are used appropriately to make the episodes more lively and realistic. Though the main characters Tom and Jerry seldom speak they are not mute characters. Occasionally they communicate in English. The other characters are more talkative. The laughing and screaming of Tom and Jerry are provided with intense vocal effects.

True Friends who Quarrel Most of the Times

Tom is featured as a domestic cat, grey and white, with short hairs. Jerry is a small brown colored house mouse who lives close to Tom. Though Jerry is very small in size, he is physically very strong. He easily lifts heavy things and withstands even severe impacts. Contrary to the usual cat-mouse conflict, Tom never wanted to make Jerry his food. He never tries to eat Jerry. His only intention is to humiliate his otherwise friend. Tom is known for his strong determination and he is always very active. Though he is dynamic Tom is not as intelligent and clever as Jerry. In almost all the Tom and Jerry episodes, Jerry emerges as the ultimate winner and Tom is the loser always. However, Tom also wins on rare occasions. Sometimes Jerry acts too aggressively. There are occasions when both of them become losers. They attack each other in a playful way and in fact they are not making serious attacks. However, by tormenting each other, they demonstrate their sadistic tendency. Whenever one of them is in mortal danger the other one helps him to escape. When the situation demands they prove that they are able to work together and live as good friends.

Motorcycles, Safety, and Accidents in Sacramento

Bad Relationship? Time to Change Yourself, Not Husband!

Lutyen’s Delhi – The Impact Of British Architecture On Delhi