Are you one of the those people who head for the shops early on Boxing Day or catch the end-of-financial year sale just so you can stock up on more new clothes and accessories, then find yourself with an over-flowing wardrobe full of clothes, some of which you may never wear? Or you might have a few favourite pieces of clothing which you wear over and over again in spite of this wardrobe full of new clothes? In her book, “You Are What You Wear: What Your Clothes Reveal About You,” Dr Jennifer Baumgartner, clinical psychologist, states that there is a reason for this. Apparently, the clothes we wear are a manifestation of our deeper life issues. 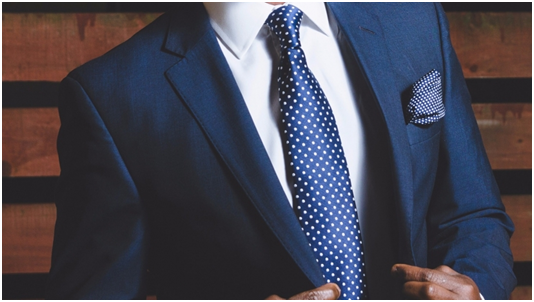 However, whatever those life issues may be, we don’t have to be defined by them. Dr Baumgartner argues that once we can identify the psychology behind our clothing choices, we can then dress the way we want to be perceived by others and in a personal style that suits our identity. I think many men have already caught on to this idea because I only have to look around me on a regular weekday in the city to see men dressed in suits. Much like how Cinderella’s ball gown transformed her from the look of a mistreated step-daughter to a princess-like figure, formal suits for men can make ordinary men look extraordinarily sharp.

Then is the Cocktail attire, which is a black suit, white shirt and necktie. Next is the Lounge Suit, which can be a navy, grey, blue or taupe suit; optional vest; shirt and tie and a pochette (an envelope-shaped handbag used by men or women). Finally is the Smart Casual attire, which is a sports coat or blazer; trousers or chinos; collared-shirt in pale colours, gingham or stripes; tie and pochette are optional; but no jeans. Dressing appropriately for the occasion is also a way to show courtesy and respect to the people around us (e.g. at a wedding, church, when meeting a very important person).

That’s why there are men’s clothing stores that sell formal suits for every occasion; from slim fit to skinny fit to classic black to three-piece charcoal to textured navy. For the convenience of the customer, they also sell accessories such as shirts, ties, belts and shoes to go with these suits, so that customers don’t have to make a separate trip elsewhere to buy these accessories.However, not all suits and accessories are the same nor are they for every occasion. That’s why the best part about these men’s clothing stores is that they have salespeople who know their wares well and have the know-how to help customers find the right suit for every occasion.

Basic Wardrobe Essentials Every Man Must Own!

Tips To Choose The Perfect Accessories To Match Your Wedding Wear

Tips To Live By When Dating A Single Mother