Most people have used sparklers at one time or another for some type of party or celebration. In the United States alone, over 1 billion sparklers are used to celebrate the 4th of July and another 50 million are used to ring in the New Year. A growing portion of the population is now using sparklers as part of their wedding celebration which has spawned a whole new segment of the sparkler industry. Though many people assume that they can just buy the same sparklers that they have used for other types of celebrations and hand them out at their wedding, there are actually a few differences between wedding sparklers and regular sparklers. Though you may be able to get away with using regular sparklers for some wedding locations, when you compare the two types it is easy to see the benefits of buying the correct ones. 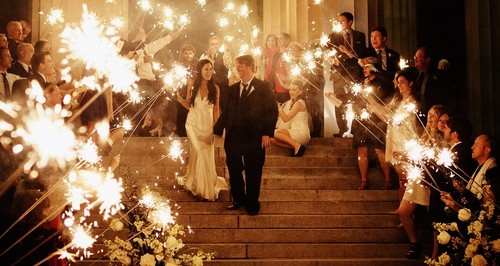 The most obvious difference you will immediately notice is the packaging in which the sparklers are sold. Unlike the red, green, and blue colors that most regular sparklers are sold in, wedding sparklers are sold in much more elegant packaging that is usually white with soft pink lettering. This is because sparklers for weddings and romantic celebrations need to look nicer next to the decorations commonly found at such an event. Most couples don’t have bright or solid colors such as red, green, or blue as part of their color scheme so having a nicer looking package is very important.

Since most wedding receptions are going to take place inside a building, having the ability to use your sparklers indoors is a very important factor. Regular sparklers usually contain color pigments that produce an abundance of smoke while they burn which can cause many problems when using them indoors; not the least of which is asphyxiation. Fortunately, wedding sparklers don’t contain any of these smoke-producing color pigments so they can be used indoors safely. Also, they are made of a special chemical mixture that reduces the risk of little chunks breaking off as they burn. This makes them much less likely to start a fire or burn holes in the bride’s wedding dress compared to regular sparklers.

How To Create The Perfect Family Style Wedding Reception

How To Select The Right Flowers For A Marriage Anniversary?